Today again I am going to discuss 1 more issue which I faced recently with Oracle Enterprise Linux – 6.3, maybe there are many who might have faced this already.

So let me discuss the problem first.

What’d caused the issue?
— I copied my VM Ware Machine- A from my current laptop to different laptop and when I started it, my default eth0 was not coming up.
— So I decided to delete this from VM Ware Setting and add a new Adapter and I did the same and started my Machine, I did not realize but I did this 2-3 times.
— So finally what I got this is my ethernet name was changed to eth3 though my configuration file which was ifcfg-eth0 before, was mistakenly deleted by me. The situation was like below: 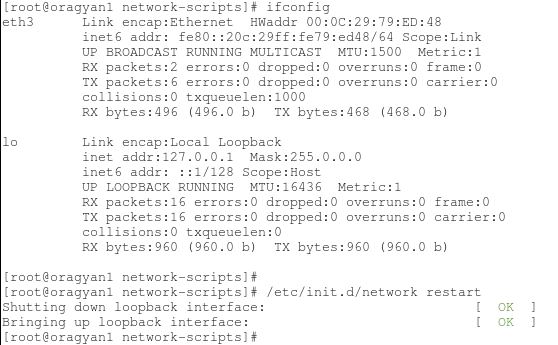 Even though I tried starting my network but it was not coming up.

What I did to sort out my problem:

I created ifcfg-eth0 file manually, and the configuration file of eth0 was like the below:

I again tried to restart my network and it started this time, however, the ifconfig was still showing eth3, however, the configuration file eth0 was picked up.

Renaming your network interface to eth0:

As you can see, the system now has the configuration for four interfaces: eth0,eth1,eth2 and eth3. The eth0,eth1 and eth2 line contain the hardware (MAC) address of the old network card, the fourth line is the new one.  Because your network configuration scripts (where IP address settings are stored) are bound to a specific device (eth0) and the system doesn’t know about eth1, it can’t bring it up. To fix this, simply rename “eth3″ to “eth0″ in the NAME field, and remove or comment other lines.

Now check ifconfig and you will get what you expect. 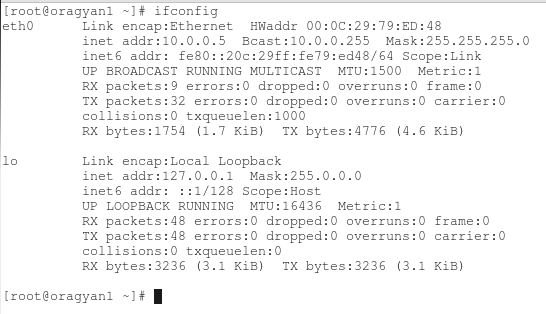